How many islands does the Dominican Republic have?

A country full of islands

The Dominican Republic has dozens of islands, including cays and islets. Some of them are smaller, others more oriented to tourism, but all of them are ideal destinations for an excursion during your visit to the Dominican lands.

If you are thinking that you need to take a few days off to lie in the sun while you soak your feet on the shore of a paradisiacal beach and enjoy a delicious fruit cocktail, then you are in the right place.

Most of the islands of the Dominican Republic are bathed by the waters of the Caribbean Sea, with the exception of a few islets whose beaches face the North Atlantic Ocean. This means that any excursion you choose to visit any of these islands will give you an experience of peace and tranquility, while living an adventure with your family and friends.

I don't know what are you waiting for to keep reading and choose one of the tours we offer to the beautiful islands of the Dominican Republic. Do you want to know them better? Pay attention to our post.

The most important and touristic are the following:

Of all the islands adjacent to the country, Saona Island is the largest. With an area of 110 square kilometers and a population of almost 1,200 people, Saona Island belongs to La Romana, more specifically to the province of La Altagracia and is part of the Parque Nacional del Este.

Its beaches of fine yellow sand, its lagoons of turquoise waters and the tropical jungle a few meters from the shore, full of coconut trees, will make you feel that you are in a real paradise on Earth. With our excursion to Saona Island you can take a relaxing swim in a beautiful natural pool and watch the starfish.

In addition, in our Saona tour with Mano Juan you will also enjoy a visit to the Sea Turtle Sanctuary and a snorkeling session in Canto de la playa, a splendid coastal area with an extraordinary fauna. 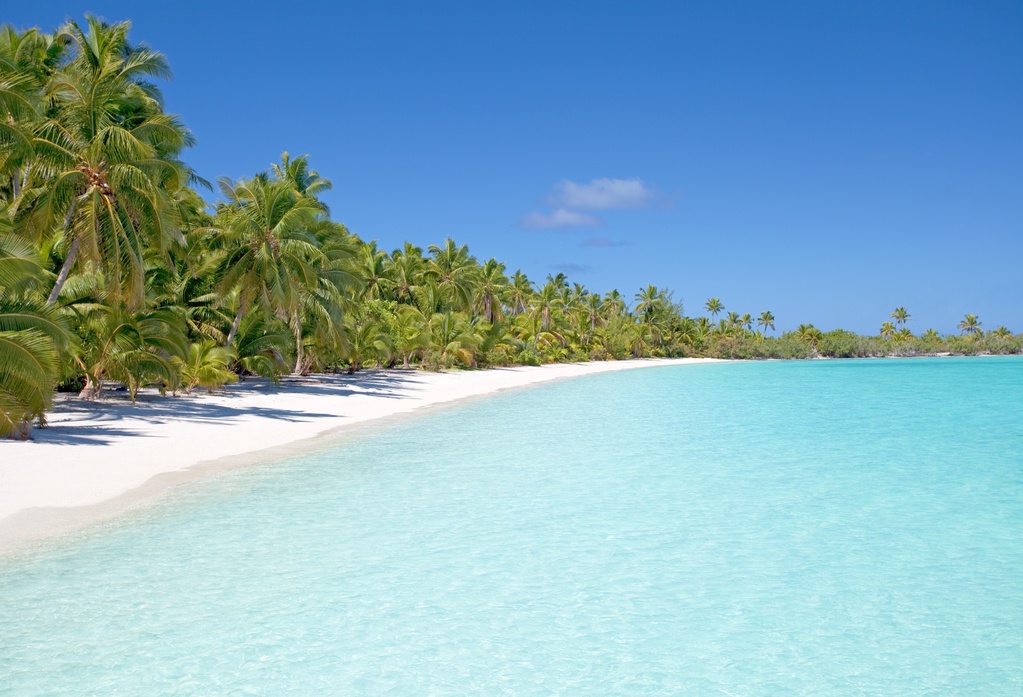 The third largest island is Catalina Island and it is only 15 square kilometers in size. Its marine fauna is spectacular since it is surrounded by coral reefs full of life and color. It is located a few kilometers southwest of Hispaniola.

If you are thinking of spending your vacation in Punta Cana, a visit to this island can be an ideal plan. With our classic excursion we pick you up at your hotel to go to the meeting point near La Romana. From there, we will take a catamaran that will take us to Catalina Island where you can enjoy a snorkeling session supervised by a professional guide who will provide information and explain any questions you may have.

In case this excursion is not enough for you, you have at your disposal another one that includes a visit to Altos de Chavón, a Mediterranean-style village on the banks of the Chavón River. Also known as the City of Artists, it is the ideal place to soak up the European culture and art that left its mark on the Dominican Republic. Our excursion to Catalina Island with Altos de Chavón is undoubtedly the perfect combination of nature and culture.

This small island of barely 22 hectares is located 3.5 kilometers north of Saona Island. Its tourist interest comes from a curious fact: for years, fishermen have been throwing empty shells here, which has led it to be considered a "cemetery of shells".

Catalinita Island has spectacular scenery and its crystal clear waters make it the perfect place for a diving session. Being located between the Atlantic Ocean and the Caribbean Sea there will often be currents, but that will not prevent you from enjoying a swim in one of the most virgin and wild beaches in the area.

Cayo Levantado does not face the Caribbean Sea, but this does not detract from its charm. Its white sand beaches surrounded by coconut trees, as well as its calm turquoise waters have led it to be considered a paradisiacal place and a very touristy destination.

Did you know that this key is famous on television? Cayo Levantado is also known as Bacardi Island, due to a series of commercials that were filmed on the island for the well-known rum brand.

Located in the bay of Samana, with our tour of the area you can visit Bacardi Island by catamaran. This tour of Samana also includes a hiking route to visit Cascada Limon waterfall, which forms a film-like landscape.

Also, if you organize your trip between January and March you are in luck, since this is the mating season for humpback whales. Many of them come to the shores of Samana Bay and, specifically, very close to Cayo Levantado. With our whale watching excursion you will not only witness this beautiful event, but we will also take you to Cayo Levantado to enjoy a delicious Dominican style lunch at Bacardi beach.

Located east of Saona Island and south of Catalinita Island, quite close to both, Cayo Ratón is a small islet that you can reach by boat or even kayak. The distances are not excessive so it could be quite an adventure to take a small boat and get there.

Its waters are similar to those of Saona Island and those who have visited it assure that it is quite similar to Cayo Arena. If you are looking for a quiet place to forget about the world for a few minutes, Cayo Ratón is the ideal place.

Beata Island is located farther away than the previous ones, south of Jaragua National Park between Santo Domingo and Port-au-Prince. It has 27 square kilometers and is currently completely uninhabited, except for teams of the Dominican Navy that spend the night on occasion in the archipelago.

Its charm is most appreciated by adventure lovers since you will discover only nature and wildlife. To the north blows very strong breezes that raise significant currents, so the bathing is not as relaxing as those of the natural pool of Saona Island.

Despite this, for many it is one of the best places to get lost and forget about civilization, since its difficult access means that the island's landscape has hardly been altered by human action. You could take this excursion as a journey of introspection to connect with the natural world in all its essence.

This islet is named after the hundreds of colorful birds that reside there. Cayo de Los Pájaros is an essential stop on your visit to Los Haitises National Park.

In fact, with our National Park tour we also include a visit to Montaña Redonda and Rancho Yanigua Waterfall, three places that will allow you to soak in the grandeur and beauty of Caribbean nature. On this tour we pass through Cayo de Los Pájaros to see a great diversity of birds that you can only find here.

You will find some of the most common species of the tropical seas such as the gannet or the red-billed tropicbird. On the tour we will not disembark on the islet so as not to disturb the birds, but we assure you that you will not miss the splendor of their flight. 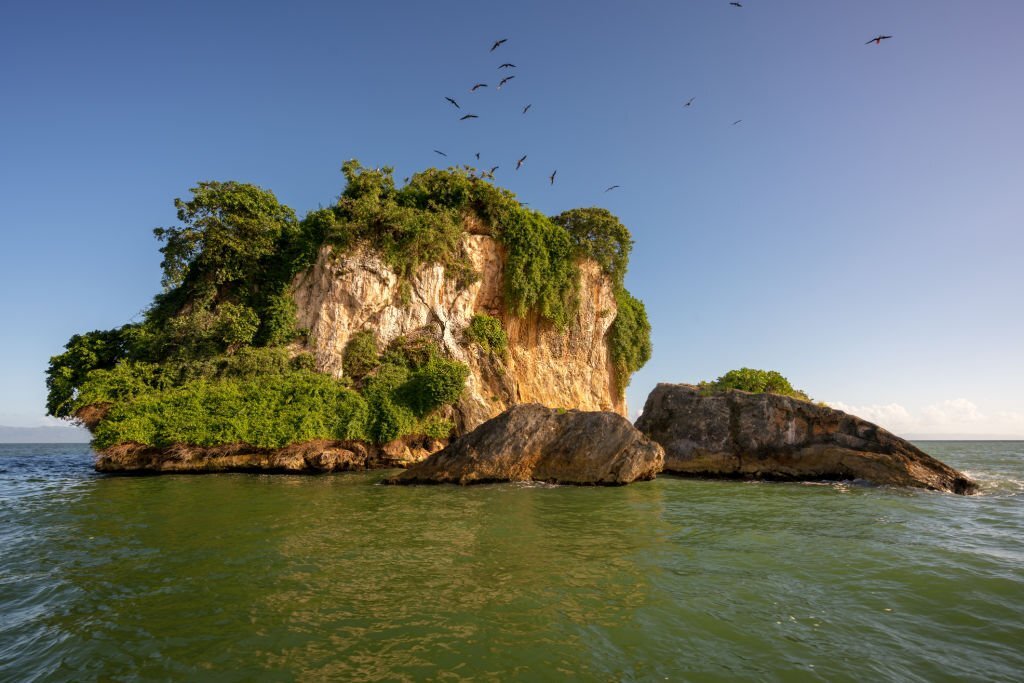 South of Beata Island, we find Alto Velo Island. It is the southernmost point of the country and is one of the peaks of the Beata Submarine Range with a height of just over 150 meters above sea level.

Like Beata Island, it is not a tourist destination, also uninhabited and with a rocky landscape. Its coasts do not invite enjoyment and relaxation, but rather adventure and danger. For those looking for a unique landscape, Alto Velo Island is the nesting place of thousands of seagulls and its forests are full of trees that are crushed by the effect of the wind. Undoubtedly it configures an unrepeatable scene.

This idyllic sandbank located in the middle of nowhere has become one of the most requested excursions to do from Punta Rucia, a cape located northwest of the province of Puerto Plata.

There are only three or four cabins on the islet, so it is advisable to bring your own drink and stay hydrated and protected from the sun during the trip. The best thing about Cayo Arena is its incredible schools of fish that will not hesitate to accompany you during your diving session to show off their beautiful colors.

This is the most important thing you should know about the islands of the Dominican Republic. No doubt you have a lot to choose from, so do not hesitate to hire our tours to live the experience to the fullest and not miss anything.
You may also be interested in these articles, 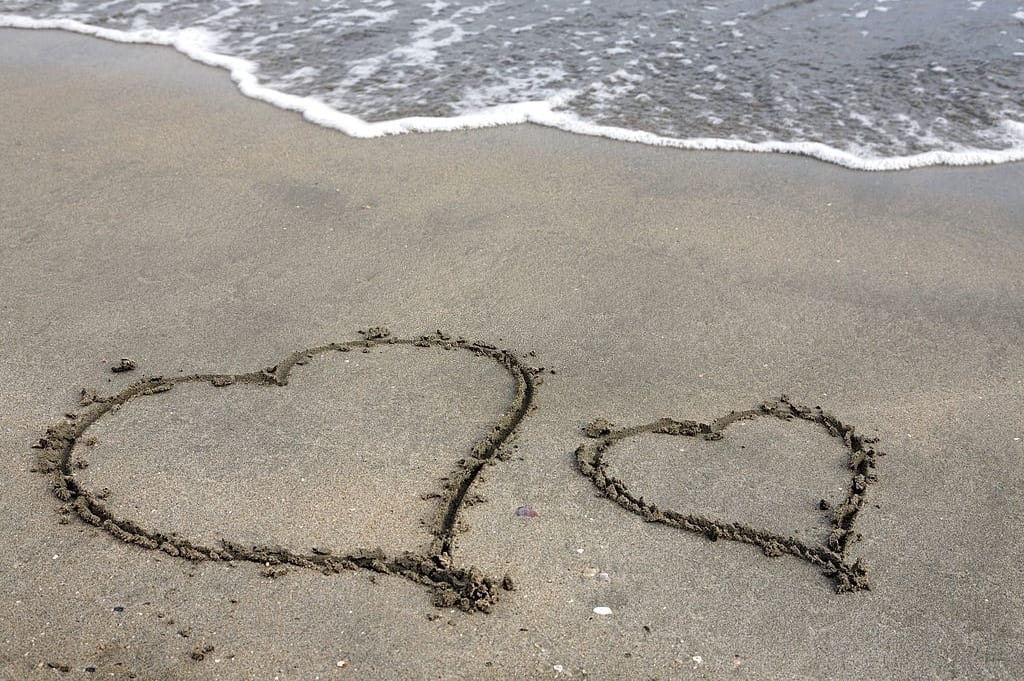 Honeymoon in Punta Cana: 5 activities to do with your partner

What to take in your suitcase to Punta Cana?